In Memory of
William Adam
Buchan
1935 - 2022
Click above to light a memorial candle.
Memorial Candle Tribute From
Miron-Wilson Funeral Home, Cremation and Reception Centre
"We are honored to provide this Book of Memories to the family."
View full message >>>
Send Flowers
Menu 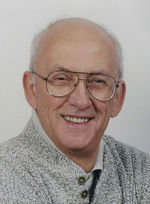 Bill was born January 1, 1935 in St. Boniface to William McKinnon Buchan and Mary Rae Inglis. Brother to Heather Orr (deceased March 31, 2018) Mary Lynne Buchan (deceased September 5, 2018), and survived by his brother John Buchan (Darlene, Jennifer, Kim) of Rosthern Saskatchewan. Bill grew up in St Boniface and moved to Fort William in the early 1950’s where he worked for the CPR as did his two grandfathers from Scotland. In the late 1950’s, Bill joined the Department of Mines (later Department of Natural Resources) and retired in 1981. Upon his retirement, Bill was self-employed in a variety of fields. Throughout his life, Bill had a passion for airplane and boat models. He was an active participant in the Lakehead Aeromodelers and other Northwestern Ontario branches. He also enjoyed sailing Lake Superior. Bill lived in many places throughout his life: St. Boniface, Fort William, Haileybury, Sioux Lookout, Kenora, Thunder Bay and Timmins. Bill will be missed by his family; twin daughters Kathleen (Glen, Drew and Mitchell) and Janet (Vincenzo, deceased January 2020), son James (Kim, Avery and Courtney), son Peter (Rosy, David and Julia) and mother of his children, Margaret Anderson. Bill is survived by his loving spouse Elaine Nyman. He will be missed by her family; Lynne (Gary Marshall), Michael (Lynn, Robert, Christopher) and Philip (Doina, Zoe). Bill was always ready to greet you with a big smile and a tease or two. He was loved and will live on in our hearts. As per his wishes, cremation has taken place and there will be a private celebration of life held at a further date. Those wishing to do so, can make a contribution in Bill’s name to the Timmins and District Hospital Foundation, your local hospital or the charity of your choice. Arrangements have been entrusted to Miron-Wilson Funeral Home, 150 Balsam Street, Timmins, Ontario, P4N 2E2. To make online donations or condolences, please visit www.mironwilson.com